Why I love to race kayaks! 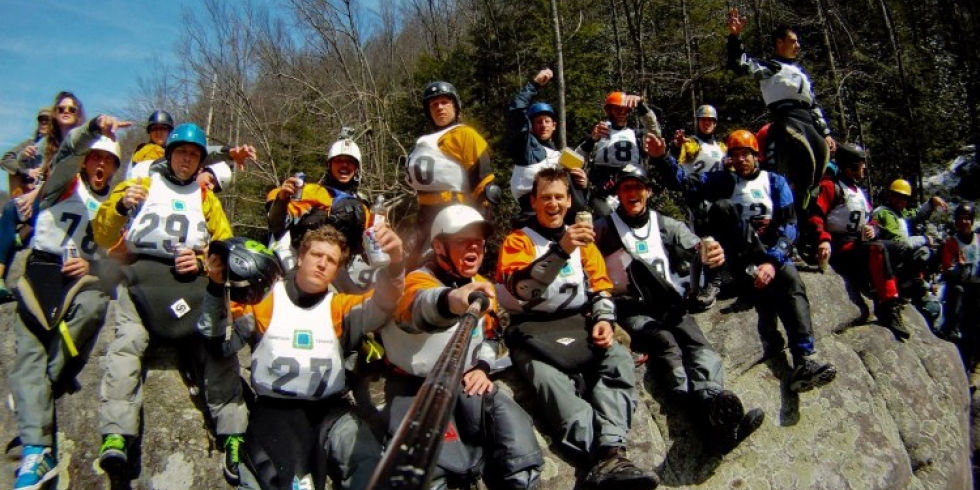 “Flow” is a state of mind – achieved when athletes feel completely engaged in their performance, lose their perception of time, concentrate on the moment (without distraction or dilution), and, perform at extremely high levels.

Essentially, these are the moments in sport that we as athletes, coaches, and consultants are all striving to accomplish. Not only has the Flow state of mind been linked with outrageously positive accomplishments in sport, it is also the state of mind that has been shown to offer us meaning in our lives.”

Racing kayaks down hard whitewater is one of the finest ways to achieve a flow state. Why? Because to do it well you have to achieve a “flow state” that is more than a frame of mind or an elusive theoretical construct. To race down whitewater you must physically enter and blend with the flow of a rushing river. When done well – levitating over waves and holes, shooting out of rapids propelled by the force of tons of water in motion, perceiving “ the line” the way Neo perceived reality in The Matrix, kayaking transcends sport and becomes one of the most authentic experiences you can have. Only a kayaker knows the feeling and it’s awesome! With a body and mind shaped by responding to moving water the flow state follows us off of the river and into the rest of our lives. Conflicts and setbacks start to be seen as nothing more than being temporarily “off line”.

My personal reasons for training hard for whitewater racing have evolved over the years. Races for me are less about proving I’m fast and more about maintaining and testing the skills and fitness that paddling class V in remote, beautiful, and dangerous rivers demands. The most dangerous things you will ever encounter in the great outdoors are middle aged men with eroded skills and strength, and delusions of possessing abilities they had at age 20. I will never be one of those guys – and yes they are almost always men. For me kayak racing is a way I can build and maintain most of the skills needed to kayak at a high level even though I have the normal responsibilities in life that preclude kayaking 8 hours a day . Because I race I don’t have to guess if I can make technical moves in my kayak under pressure, I know I can. I don’t have to guess if I have the speed and stamina to help a friend in trouble, I know I can do that too. Real confidence comes from testing your skills regularly with meaningful challenges.

People who appreciate authentic experiences and work hard to experience beautiful places tend to be beautiful, authentic people. This past weekend at the Top Yough Race in Western Maryland I was reminded of how lucky I am to be part of the whitewater community. I was moved to hear the sincere and earnest tributes to Isaac Ludwig, our departed friend who’s life the annual race commemorates. It was moving to see people doing a fun, beautiful, and difficult activity simply for the love of doing it and for the sake of enjoying each other’s company. I’m grateful to the sponsors of the Top Yough Race for being so generous even though supporting the race is not necessarily going to increase sales and market share for their brands. The owners and employees of those companies genuinely care about the paddling community because they are part of it. The global whitewater kayaking community is small not because of anything being wrong with our sport and community, but because so many things are great about it. In a modern world that favors instant gratification, phony - status driven pseudo accomplishments, and commercialism, kayakers value challenge, beauty, community, and flow. I love our sport and our community and I’m proud to be making my living introducing as many people as I can to the rewards of paddling.  http://anadventures.com/

Yesterday during an address to the Nation in which he honored our Veterans, President Obama told the story of Taylor Morris, a member of an Explosive Ordnance Disposal Team who was seriously injured and almost died while serving in Afghanistan.Taylor, who kayaks with Team River Runner as part of his journey back to an active life, had been to the White House before and decided to decline this last invitation so he could participate in a kayaking trip with a group of great people. I give credit to the President and his speech writers for not feeling snubbed by Taylor choosing paddling over their event, and instead telling his amazing story as a tribute to his service and spirit, and because it made a powerful and inspiring statement. Here's the excerpt from President Obama's speech:

And it’s an obligation that we gladly accept for Americans like Petty Officer Taylor Morris. Six...
months ago, Taylor was serving our nation in Afghanistan. And as a member of an Explosive Ordnance Disposal Team, his job was one of the most dangerous there is: to lead the way through territory littered with hidden explosives; to clear the way for his b rothers-in-arms.
On May 3rd, while out on patrol, Taylor stepped on an IED. The blast threw him into the air. And when he hit the ground, Taylor realized that both his legs were gone. And his left arm. And his right hand. But as Taylor lay there, fully conscious, bleeding to death, he cautioned the medics to wait before rushing his way. He feared another IED was nearby. Taylor’s concern wasn’t for his own life; it was for theirs.

Eventually, they cleared the area. They tended to Taylor’s wounds. They carried him off the battlefield. And days later, Taylor was carried into Walter Reed, where he became only the fifth American treated there to survive the amputation of all four limbs.
Now, Taylor’s recovery has been long. And it has been arduous. And it’s captivated the nation. A few months after the attack, with the help of prosthetics, the love and support of his family, and above all his girlfriend Danielle, who never left his side, Taylor wasn’t just walking again. In a video that went viral, the world watched he and Danielle dance again.
I’ve often said the most humbling part of my job is serving as Commander-in-Chief. And one of the reasons is that, every day, I get to meet heroes. I met Taylor at Walter Reed. And then in July, at the White House, I presented him with the Purple Heart. And right now, hanging on a wall in the West Wing is a photo of that day, a photo of Taylor Morris smiling wide and standing tall.
I should point out that Taylor couldn’t make it here today because he and Danielle are out kayaking. (Laughter and applause.) In Taylor we see the best of America -- a spirit that says, when we get knocked down, we rise again. When times are tough, we come together. When one of us falters, we lift them up. In this country we take care of our own –- especially our veterans who have served so bravely and sacrificed so selflessly in our name. And we carry on, knowing that our best days always lie ahead."

There are some things kayakers should feel proud of when reading this piece. We should be proud of the fact that Taylor has chosen kayaking as one of his pathways back to health, and that our community was there to embrace him through the volunteers of Team River Runner. We should be proud that the qualities that the President described as being the best of America are particularly strong in the whitewater kayaking community. The image of Taylor not just surviving, but thriving after such a terrible trauma, and taking on the challenge of kayaking is the perfect embodiment of the spirit required by our country and many individuals, in order to recover and embrace new possibilites. 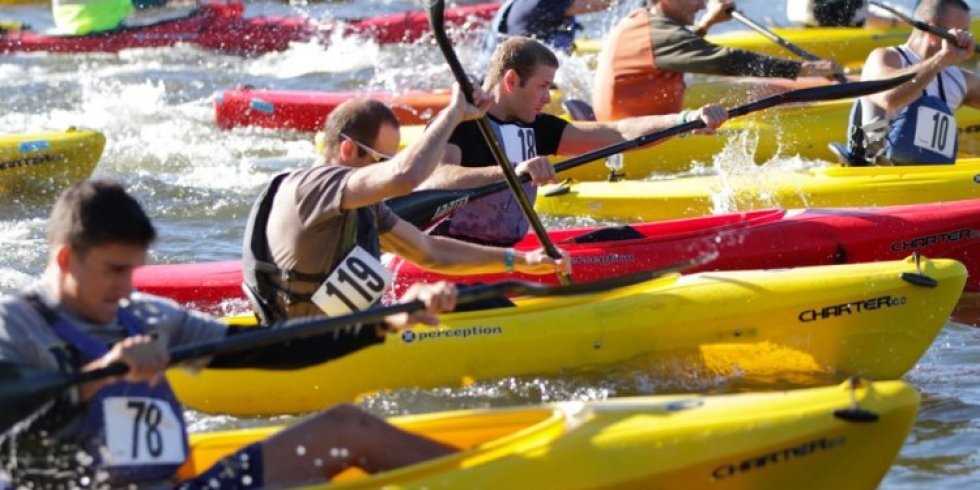 Team River Runner is an amazing organization that Dagger and Wave Sport both support, and that I've been proud to be a part of for almost 8 years.

Each of those years we've held a run/kayak biathlon in Washington DC to raise funds that support the paddling programs and trips that TRR offers to Veterans and their families. The race is a powerful demonstration of the positive effects that Team River Runner's activities and community have on the lives of so many Veterans who are healing from injuries sustained while serving our country. Watching the Veteran's TRR serves, running or handcycling, kayaking in this race, while refusing to have their lives defined by injury, is absolutely inspiring. I use the inspiration I get from the Veterans I meet through my involvement in TRR as motivation to race as hard and fast as I can and as a reminder to show gratitude for strength and good health by living life to the fullest every day. This year's Biathlon was the best yet, with over $250,000 raised and our largest field of competitors ever. We had perfect weather, a huge croud of spectators , and a great time was had by all. I want to give a huge thanks to all of TRR's staff and volunteers for a wonderful event, and to all of the participants and corporate donors of this event who have done so much to facilitate health and healing through paddling for Veterans.

Training up for the Team River Runner Biathlon 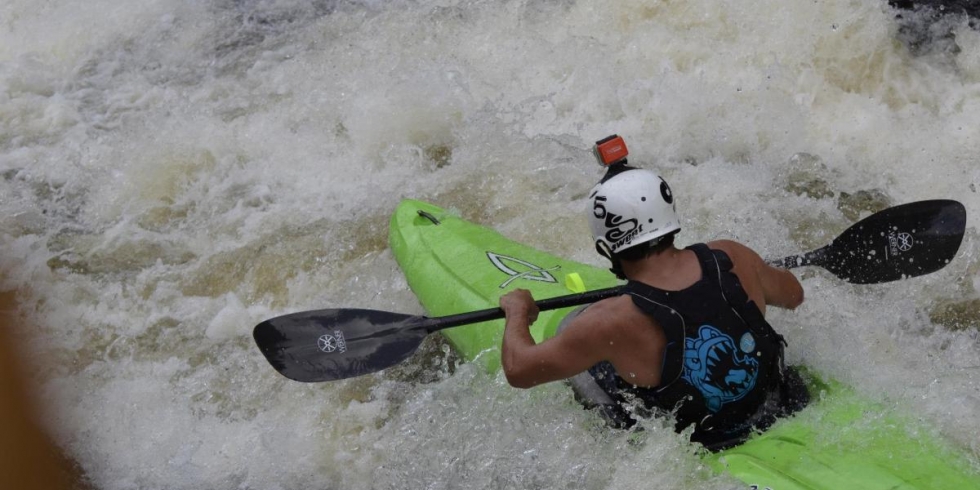 For many whitewater kayakers on the East Coast, Fall is racing season. The Gauley, Russell Fork and especially the Green Race bring kayakers out in droves to experience the thrill of paddling fast down quality whitewater.

For the past 7 years I've been involved with Team River Runner, a great organization that helps Veterans find healing through participation in paddle sports. Every fall for the past 7 years TRR has held a run/kayak biathlon in Washington DC that has become TRRs largest fundraising event. Even though this race is held on flatwater I get just as fired up for this race as I do for the Green race. racing side by side with men and women who have used the sport we love to heal from terrible injuries is humbling and awe inspiring, and stokes my internal fire to bring the heat at the other races of the Fall.

I encourage everyone who can make it to enter this race and to support TRR. It's a great feeling to watch the sport many of us love so much change lives.