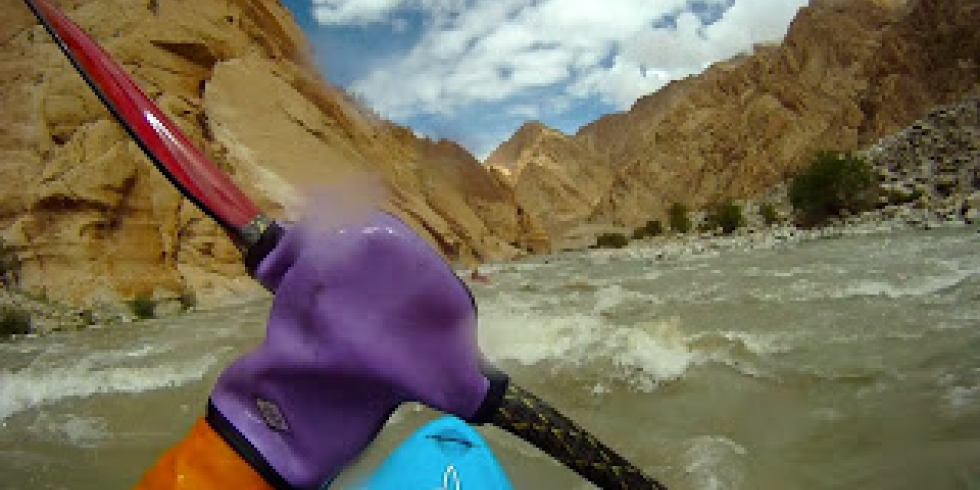 The last stop on our Ladakh kayaking tour was an overnighter on the Upper Indus River. This is the river that India was named after and the valley has a rich history of ancient civilizations dating back to 3300 BC.

For this trip it was necessary for us to apply for visitor permits and travel far upstream near the border of Tibetan China. It is a remote region with a strong military presence and we passed by many base camps on our way to the put-in. As we drove further and further from Leh up the dusty road, I was again relieved to have such a great group to travel with. We were joined by a long lost paddling friend, Polly Green, and a local paddler named Biru. Hindus consider all rivers in India to be sacred and with one look at the Upper Indus I could see why. The landscape was completely different from the Zanskar and resembled the red rock canyons of the Colorado River. The river was roadside for the most part. On our way to the put-in we were able to scout some rapids from the truck, but there were way too many to remember. The only thing we knew was that somewhere there was a surprise sticky hole that was responsible for a lot of swims. This section of the Indus had continuous class IV to IV+ read and run rapids, my favorite kind of kayaking! From the moment we launched there was nonstop whitewater through a scenic canyon. We all jumped in line and were making good progress until we got to the legendary hole. It was sure a sneaky one and we didn't see it coming until a couple people had already taken some pretty good beat downs. Fortunately no one swam and everyone was okay physically, but mentally it presented some challenges for the group. The next morning we continued downstream with Polly leading the charge, but Susan was gradually falling behind. The rest of us were somewhere in between, but as the day went on, the gap started getting bigger. There was talk of splitting up the group to make sure we could catch our ride at the takeout, but I fully supported taking time to scout/portage a few things and wait for everyone to catch up. The problem with being in the middle of nowhere India is that you don't really have the option of walking off the river alone if you're having a bad day. My peace of mind relied heavily on the “safety in numbers” rationale so I felt strongly that we should stick together and keep an eye on each other. After some negotiation we were able to pull it together as a team and find patience as others were overcoming mental struggles. Eventually the rapids became smaller as we approached a smelly bridge that marked our takeout at the Upshi truck stop. We parked ourselves and our pile of kayaks at a roadside diner and waited for our ride, but the adventure continued when the shuttle vehicle never showed up. As evening set in, we had all given up hope of being rescued and jumped on a massive bus to Leh that coincidently had just enough room for the nine of us and our kayaks. On our last day in Leh I was not ready to leave and tried without luck to strategize a way to stay longer. That night Monica, Ty, Susan, and I hiked up to the Shanti Stupa overlooking the city and reflected back on the last couple weeks. The people, places, and rivers of Ladakh had made quite an impression on me. The simplicity, happiness, and raw beauty of that area is something I will never forget.  Jacob, Susan, Adam, and I said our goodbyes and headed to the airport early the next morning. I was sad to leave Ladakh but so grateful for the experience. It definitely gave me a new perspective on the world and what I value in life. For more information about kayaking rivers of the Ladakh region, check out The UK Rivers Guidebook at:

I got all my travel info from this book and I found it to be very helpful: