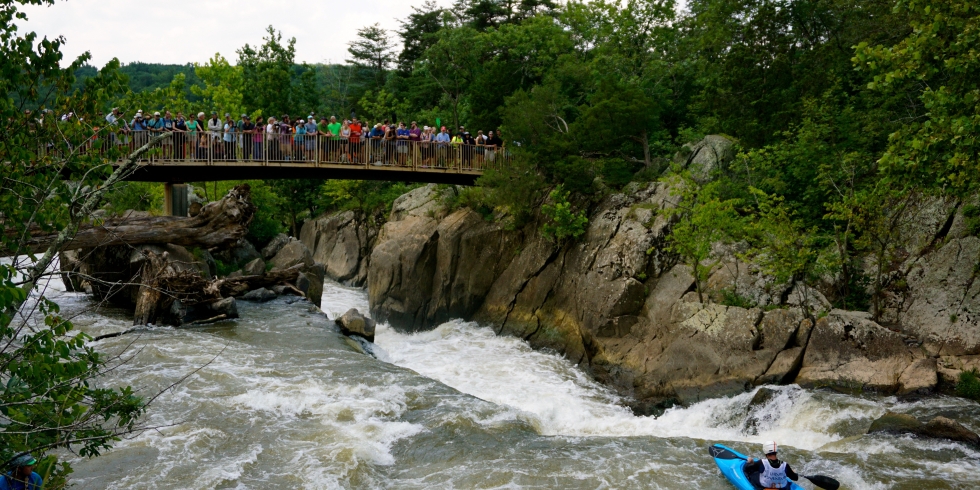 A few weeks ago I experienced what was one of my most fun weeks of the year, and surprisingly enough it involved me being in DC working 8 hours a day! It was the week leading up to the Great Falls Race and started off with my first time running the Fish Ladder section of the Falls followed by an evening watching fireworks from my kayak with friends in from out of town.

Steve, Erin and Toby (all good friends from NC) were working from home from my house for the week so that we could all get evening practice laps on the falls. Everyday the team would pick me up from work loaded down with kayaks and a cooler of beer and snacks to head out to the river. Getting to paddle Class 5 rapids after working a full day was pretty awesome! It really highlighted just how special having a place like Great Falls in your backyard is and how fun it is to have friends in town!

After a week of good times with good friends, it was finally time for the race! We loaded up one final time on Steve's truck and headed to the park. The parking lot was filled to the brim with kayaks on roofs and scroungy kayakers walking around getting geared up.

We all met for a short safety meeting and were told about the race logistics. The Men's longboat would go first followed by the Women's Open Class then the Short boat and Slalom competitions. There were over 60 competitors total with  After the meeting, everyone headed out to squeeze in a practice lap or two before the race started.

My practice lap went great, nice and smooth. I was feeling strong at the starting line when it was my turn to go fast. My lines through the first and second slides and the back canyon went well, and I cleaned up some of the moves I had been struggling with. I was feeling good coming into the fifth slide which had been a line I was styling all week. During the race however, I got pushed a little right and ended up in the river right eddy, which was only a problem because the finish line was on river left! Having to work my way up the eddy then ferry across the river to make my way to the finish cost me too much time to be competitive in the race, but it was still one of the most fun races I have been part of. Check out all the lines below!

I ended up placing third behind Moriah Heaney and Erin Savage, but one of the best parts of the race was getting to compete was these awesome ladies! I am already can't wait for next year's Great Falls Race. Put it on your calendar!