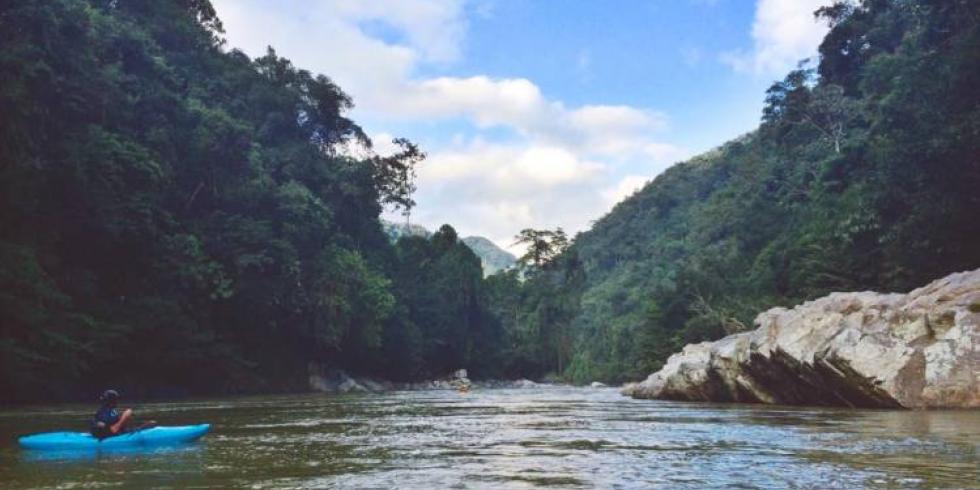 Looking upstream after the first rapid. The view from the footbridge.  We put in here, on river right.

A few good boofs after we put in, we eddied out under a natural alcove to break camp.  We started a fire near the river and set our hammocks up about 30 ft from the river.  Even though the skies were clear, it was going to rain (according to the boys).  I thought it was a little overkill but I was too tired to care.  I tied my hammock with the NRS straps I brought from the states and the tarp just above with some cheap string.

It started to get dark as we cooked the rice, veggies and chorizo.  Although it was warm enough for shorts and tank top, all I wanted was to curl up in a DRY hoody.  Everything seemed wet it was so humid and I was so tired of it - I just wanted to be dry.

Once the dishes were empty and our bellies full, we made our way up to the hammocks.  We had all used one of the same trees so we were all right next to each other.  I set my sleeping bag out and slid in under the tarp and into the hammock but kept going down until I hit the ground.  First night in the jungle, and this gringa ties her hammock to a dead tree!

Once I figured out which tree wasn't dead, I cautioulsy laid down in my hammock still unsure if it would hold me up.  As soon as I was able to close my eyes, the sky cracked open and the rain came down.  I settled into my hammock a little more, grateful for the $18 tarp I had bought at Wal Mart the day I flew out.  The sleeping bag I had wasn't much more than a liner but it was too hot.  The rain kept coming down and just when I thought it couldn't rain harder, more would come down faster. I didn't sleep well.  I would close my eyes but the lightning was so bright, it would light up the darkest places in the jungle outside my tarp.  I watched this show all night until the rain stopped and the sun came up.

We packed our boats, cleaned up camp and continued downstream.  The boys had been right about the rain, the river had come up a few feet and felt bigger.  We rallied through some class III fun water with lots of waves and some boofs before the river became more narrow.  I remember this section especially because there were actual canyon walls rather than a messy wall of jungle.  It seemed as though huge boulders had just been placed carefully in this little canyon just so we could weave our way between them.  My GoPro died around this time, of course, so I don't have any photos of this section - or anything below.

More tributaries, including el río verde, added to the volume of the river the further downstream we went.  Soon the wave trains felt like home; like the big water on the North Fork or South Salmon.  Jules eddied out at one of the tributaries and we followed him to a pool where we ditched our boats.  We scrambled up the rocks and as I almost slipped into the water I looked up to see a ~30 ft waterfall!  We sat underneath and drank the rum we had leftover from the night before.  The water slammed into the pool in front of us and the trees swayed with the breeze from the lip of the falls.  I had my last sip of rum and then jumped out from behind the wall of water.  It was colder than el río verde but it felt nice - especially since I had some rum to warm me up. After the falls, we paddled for a few more hours through big wave trains.  It amazed me everywhere I looked, the jungle was so dense.  I thought the PNW was dense!  I couldn't imagine having to hike through any of it.  The boys had been talking about how bad the hike out was and that it was almost as bad as the hike.  I floated past amazing surf waves because I was still sore from hiking in and didn't want to waste energy. What was described to me as a savage hike back to the road ended up being a stroll through a backyard and up a driveway (thank goodness).  We arrived in Medellín 2 hours later and I went straight to sleep - horizontal and not in a hammock.