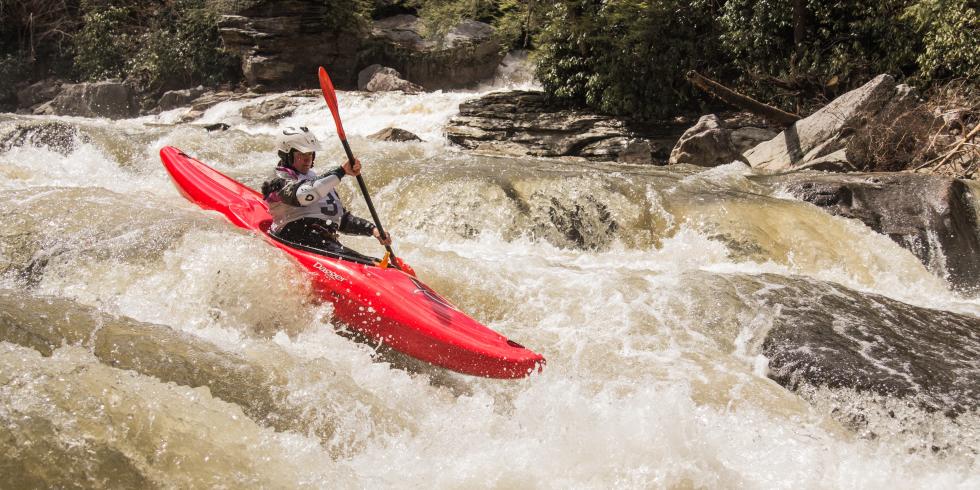 For those that don't already know, I about three months ago I moved to Washington, D.C. to start a new job with National Geographic as the Program Manger of the Active Travel Trips. It was a big and scary change for me- I went from traveling the world guiding trips and living in the small mountain town of Bryson City, NC to working in an office and living in the big city. I am happy to report that the move has been great so far! My job is great and I have found pockets of small town living even in the city, and have especially loved getting to explore new rivers in the area!

Almost immediately after moving I was introduced to Margaret Williams, a local female class 5 kayaker, and she quickly updated me on all the rivers I needed to paddle, festivals I needed to attend and races I needed to compete in.

First up was the Top Yough Race which took place the first weekend in April. Since I had never paddled any section of the Yough before, we headed out early on Friday to get a few practice laps in. Mutual friend Erin Savage rallied up from NC to join Margaret and I for the weekend which made for even more fun. I had heard so much another Upper Yough, but never much about the Top. I was pleasantly surprised as to what a classic the Top Yough was. Short but sweet, it reminded me a lot of the Tobin section of the Feather out in California. The water level had been really low, but rain on Friday afternoon and evening started to get it bumped up. I think we all went to sleep that night a little worried about what kind of level we would find in the morning.

We had totally planned to get up early and get another practice lap in to see the current water level before racing it, but when it started snowing, motivation was hard to come by. Ultimately we traded a practice lap for coffee and a delicious breakfast in a warm cafe and hoped for the best. Thankfully, while the river had risen, it wasn't significant and if anything made the section easier to race because you didn't have to worry as much about getting hung up on rocks.

The race as a lot of fun. The Top Yough is a perfect Green Boat race, with fun lines and relatively easy moves to make, but with enough action to keep you on your toes. I told myself (as I do before most races with class 4-5 moves) to just keep it smooth and in control. I'll take a safe and clean, but slightly slower run, over the possibility of a fast but loose one any day. In the end, I was very pleased with my race lap and made it through without any flips, or spinouts, or pins and it didn't feel too slow either!

I got down to the bottom in time to see Margaret come through the finish line. Erin and I were already on the rocks cheering her on.

This race was also my dog Karl's first kayak race! Thanks to Stacey Magda for offering to hike him in. It was so fun to get to the finish line to see him waiting. He seemed to love the experience and enjoyed hanging out with all of the kayakers and other dogs.

Next on my list for new river and races was the Cheat River Festival, which took place the first weekend in May. Unfortunately, Margaret had to work over the weekend, but so I headed up solo on Friday afternoon of the festival, just in time for the race. There were over 100 people at the starting line with a wide assortment of water crafts. Some people were definitely there to go fast, but it was obvious everyone was there for a good time.

The race was long with lots of flat water! It was my very first run down the Cheat, so it was very interesting trying to pace myself without having any idea how far into the river I was. Fortunately, there were plenty of nice people around me who didn't seem too bothered when I asked them "are we there yet?!" After an hour and 20 minutes of pushing myself, I was tired!

I finished second in the race behind Ashley Knee who not only beat me by a large margin, but placed competitively amongst the males as well. I am new to the area so I don't know all the locals yet, but I hear Ashley is a local slalom racer and she's fast!

The rest of the weekend was spent enjoying the river and the festival with good friends. We paddled the Top and I had my first lap down the super classic Upper Yough section on Saturday. Sunday I enjoyed a much slower float down the Cheat with good friend. The festival itself was super fun and one I highly recommend everyone checking out!

Next up on the racing list for me is the Great Falls race on the Potomac July 11. Stay tuned for more on that!