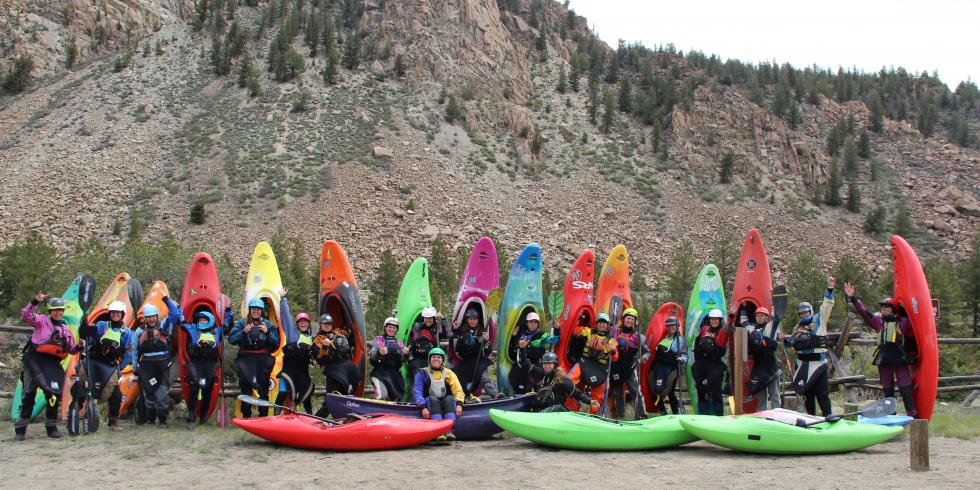 Last fall, 52 women came together to paddle down the Upper Green River and 24 of those women continued on into the Narrows of the Green for the inaugural Green River Takeover event. The idea was to get as many awesome women as we could on the river at once and help grow and bring together the female kayaking community. It was an amazing day!

After the success of the Green River Takeover and at the request of Earl from CKS, I decided to expand the Takeover series by adding a new location! With the immense support from both Dagger Kayaks and AT Paddles, this past Memorial Day weekend over 20 women came together at CKS Paddlefest to paddle down the Arkansas for the Women in Charge: Arkansas River Takeover! We had 21 women on the Numbers section and another 2 more women joined us further downstream on the Fractions section.

We started out at the CKS store on Main Street Buena Vista, CO for a quick meeting and loading of the boats before heading to the Numbers put in. The local River Runners rafting company helped us out by providing us a bus and trailer to get us to the river.

After a fun ride to the put in (with the bonus of not losing any boats off the trailer along the way), we all got geared up and posed for a group picture. The sun was shining and the stoke was high! We were all excited to head down to the river and get on the water.

The day was filled with tons of smiles, high fives and boofs! While I enjoy being on the river with anyone, there really is something special about being out with a huge group of women all laughing and encouraging and supporting each other along the way.

After getting off the river, we all met at the Dagger kayaks tent to enjoy snacks, cold drinks and quality time to hang out and get to know each other better. This is also where we did the event raffle to raise money for the Shannon Christy Fund, an organization that supports women in paddle sports. We ended up raising $400 for the fund and lots of people went home with great prizes! Thanks to Dagger Kayaks, AT Paddles, Seals Sprayskirts, Mountain Khakis and Astral for supporting this event! See more footage and info from the event at the Women in Charge:Takeover Series FB page and mark your calendars for second annual Green River Takeover happening on August 29, 2015!

To learn even more, check out this great local newspaper article about the event!